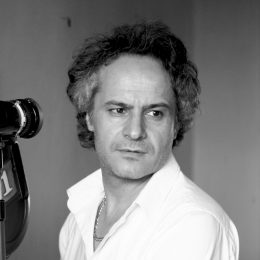 Born in July 16, 1962 in Tehran, Iran, Parviz Shahbazi is a filmmaking graduate of the Tehran Cinema College. During the early 80s he began writing short stories and directing short films. After editing several films and directing 12 shorts he made his first feature, TRAVELER FROM THE SOUTH, in 1997.
This debut feature has been screened at countless international festivals bringing Shahbazi worldwide recognition and several awards along the way, including the Golden Award at the 1997 Tokyo IFF. His second feature, WHISPERS (2000) has likewise won much international acclaim.
In 2002 his third film, DEEP BREATH, was selected for the Directors’ Fortnight section of the Cannes IFF, to great critical acclaim. The movie also won a FIPRESCI Award at the Pusan IFF, the Jury’s Special Award at the Turin IFF and the Best Film Award at the Belgrade Author Festival.
KARAT 14, made in 2007, and TRAPPED, 2013, are Shahbazi’s fourth and fifth features.
MALARIA, his sixth movie, was selected for the 2016 Venice Film Festival and the same year won the Grand Prix at the Warsaw IFF.
TALLA is his latest feature.